Originaly written for InCider Bar Blog, but as the bar is closed for ever and its web slowly decommisioned, I moved the post here so that I never forget the fun of having a bar. 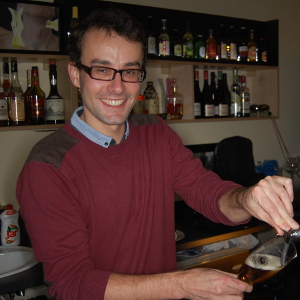 Many people ask me how the idea of cider bar came to me. I'd like to say that since I was born I have always had a dream of creating the first cider bar in the Czech Republic. But that is simply not the case. I had always wanted to be a programmer. I even was in IT for several long years. But than slowly I started talking about opening a bar one day, when I will be fifty and will be done with the IT world. And than one day I left IT for other reasons and way much sooner than my future bar fuzzy plan suggested. Once out, I suddenly remembered that I had wanted a bar one day.

Around the same time my friend got back from a gap year traveling the world. And she has always wanted to have a wine bar. So we decided that we might just as well build the bar right now and together. The division of laber was straight - she gets busy with the wine, I do all the rest. Fair enough, but what exactly is it “all the rest”? I started learning how to brew coffee, how to serve a draght beer and I also started visiting all kinds of new bars and bistros of Prague and taking notes on what they are doing well. And than I tasted the first cider of my life. Second. Third... The hardest part was finding the venue. We were searching it for two months. At the end of the two months the owner of the place in Krymská Street called me. He said he had turned us down two months earlier, but that the guys who had been supposed to rent the place changed their mind and we could now come to see the place if we were still interested. All the time while searching for venues I was saying that this place would have been the best, so we quickly went to see the place the same day. By the evening I was sure this was the best place ever. But my friend did not share the enthusiasm for the area of Krymská and simply did not want to have anything with it.

I was considering my choices for a while. Ether go do it alone or forget about having a bar forever.

I decided I should at least try. And when I was opening a bar alone I did it without the wine that I do nothing about. Just cider and only cider. By that time I already knew 10 Czech cider makers and I was confident that will be enough for opening a specialty bar. Altogether it was an intuitive decision withou any real business plan. And the was just the beginning

Than the place desperately needed two months of reconstruction. In parallel to that I started attending a course for waiters, mostly to get a legal permit to run a bar. And in parallel to that I took one day course of furniture making from palettes and a few weeks later one day course of welding. With all that fresh skills I started making furniture and equipment for the bar.

The official openning was planed for late October/early November 2014. The floor has not dryed yet, the bar was not complete, the lights were not installed at all,... but the date had to be kept. Finally the day came and the bar opened but in a very not finished state.

Since then the bar grows slowly. We do get new Czech and foreign ciders every now and then, the TODO list is shrinking, more and more cider lovers are coming and soon we will celebrate 3 years since opening.

Bonus: you can see the beginning of the bar in this fast-motion video: