Bolivia: There and Back Again

After South Loop, La Paz twice and Copacabana it was time to move east, because the day of Misa’s flight to Europe from Santa Cruz was slowly getting closer.

We went with an overnight bus to Cochabamba and arrived on 20. April. Only a week and half before Evo decided to nationalize the Spanish owned electricity company on 1st May. He did so by ordering Bolivian army to take hold of the company headquarters. But to show nice face, he told the Spanish, that he will pay them some money for this company. Probably a fair market price.

Later on a bus I asked some locals what is their opinion on nationalization. The version they all agreed on was that generally it is not too good, because nationalization is a nice word of the president getting some property of his own (adueñarse, very nice word). In this case however it was right, because “the Spanish owned company was exporting too much electricity to Spain leaving too little for Bolivians”. When I asked how it could it be done to export electricity over the ocean, they were at a loss.

Cochabamba itself is a nice place. They have a huge Jusus statue above the town like in Rio. No, actually a bit bigger. In Rio it is 33 meters tall for each of Crist’s life years. However the Bolivians rightly claim that Jesus was not crucified on the day of his 33rd birthday. Therefore the Cochabamba Jesus is 33.something tall.

The same day we arrived, we also left with another overnight bus to Santa Cruz. On the way, there was a thunderstorm and rain so strong that the bus had to stop for a few hours. I would not know as I slept through, but Misa told me. As a side effect both our backpacks were wet (also everything inside).

Santa Cruz is a nice city, with good nightlife. But I spent way too much time there waiting for my passport. 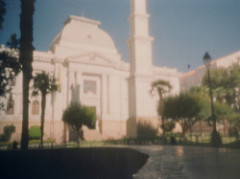 After Santa Cruz I went to Sucre, the official capital of Bolivia. (No, it is not La Paz and therefore no, La Paz is not the highest situated capital in the world). I again took overnight bus, but this time I did not pay too much attention on selecting a good company. Big mistake. I did not get any sleep, as next to me a young mother with 6 month old daughter were sitting, the road was bumpy and windy, it was really cold inside and there was no toilet. During the 16 hour ride we stopped once at 3am for “toilet”. The bus simply stopped in the middle of small sleeping town. The men peed in the middle of the road and the women jumped some poor person’s fence an peed in her garden. I would really not like to live in such a town.

After having visisted Casa de la Independencia (of Argentina) in Tucuman, I could not miss the Bolivian version in Sucre. The Bolivian Casa is actually much bigger and better, although they do not have Luz y Ruidos show. Quite surprisingly they do have the oldest ARGENTINIAN flag in there.

The Bolivian history explanation was also funny. Simón Bolívar and Antonio José de Sucre fought for Independence of Bolivia. When they won, the country was named after one and it’s capital after the other. Bolivar was the first president, but gave up soon as he was also a president of other Latin America countries. Sucre became the second president, but was killed shortly afterwards. They jointly established the Bolivian tradition that most presidents do not make it till the end of their term.

Sucre is also known for its relatively kind immigration office. I still needed a new entry stamp for my new passport, so I went there and quite surprisingly I got it with no fuss, no money and for 60 days. Now I was ready to finally leave Bolivia. Except… 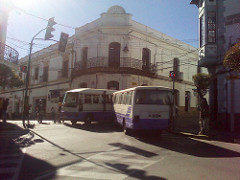 Except the bus drivers just went on strike. They blocked each crossroad and made Sucre one big pedestrian zone. The next day the bus drivers’ strike was unexpectedly called off, so I bought a ticket for La Paz and departed at 8pm. 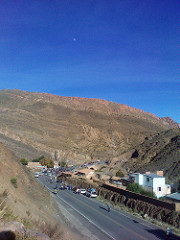 Around midnight the bus got stuck in a road block. We all slept in the freezing cold bus only to learn in the morning, that we are close to Potosi (actually further away from La Paz than the day before) and that the road is blocked by miners on strike. Bolivians said it could take a few more hours or a few more days. When the bus driver got lost, I decided not to wait a few days, picked my backpack and went walking over the road block.

The road block was a few kilometers long. Probably done by dynamite. The miners have excess amounts of dynamite and I can imagine that the easiest way how to block a road with stones is to blow some dynamite above the road. 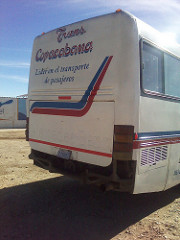 Luckily there was a bus on the other side of the block. This bus was charging twice the price even to non-gringos, but with no other options everybody paid in the end. On the way we tried to stop for lunch near Oruro. The bus stopped on the side, the driver bent out of the window, but could not speak comfortably to the street food vendors. So he started reversing. What he did not know was, that there was a pole right behind the bus. We hit it and several cables fell on the bus. At first I got scared that we would all get big electric shock. But I soon realized these were “only” telephone cables. But the bus kicked them off of several poles forward. The villagers started coming to lynch the driver. He did not waste a second more. We left and the poor villagers were running after us in the dust. Later we stopped to investigate damage done to the bus. Only the bumper was missing.

12 hours later than expected I finally made it to La Paz for the third time and we even could go downtown and escape a road block by students on strike. 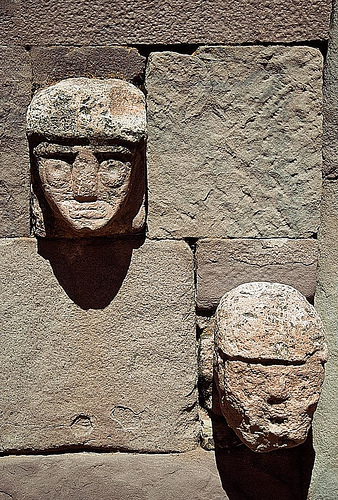 Because there were expected more road blocks of Medics on strike that week I decided to leave the next morning. On the way to the border I stopped in Tiwanaku to see the ruins that even Incas were wondering how these could have been made. Unfortunately the Spanish were not wondering and used most of it to construct railroad, so not much is left today.