Still without passports and a bit exhausted bymarathon through the embassies we set off to actually see more stuff in Bolivia. We set off to Copacabana (yes, Bolivia has it’s own Copacabana). The bus from La Paz took 4 hours of which I slept the most. There is a ferry on the way, where all passengers are kicked off the bus, have to buy ticket, get passenger ferry and wait for the bus on the other side. Some Bolivians hide in the bus to avoid the 1.5BOL charge. Our passenger ferry as called Titanic, but we made it across. 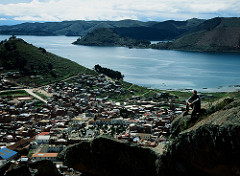 Copacabana is a nice town on the shore of Titicaca. We stayed 2 nights in relatively shitty hostel, but we were kind of short on money as the only credit card left was maxed out. By the day we did not do much except climbing the southern hill. What a view!

By night we went to see the concert of Argentinian couple who are riding their micro car from home to Mexico. All tips go on the fuel, they said. The other night in Copa we actually saw them again in different place. As we knew their best pieces already we also requested additional song – The Terminal (which is actually called something else, but it was composed on the terminal de buses de Buenos Aires) – and they were so happy to actually have some fans who know their songs that they played it for us.

The next day we went to the north village on Isla del Sol, here the sun was born according to Aymara legends. Very relaxed place once the “one day” crowd left. We decided to take it slowly and stay for a night. The hostel was right at the end of the village, we had a view on Titicaca from two sides of the room, each at different bay. We hiked to the Laberinto Chincana, but at that time we did not know, that there is a hidden spring of magic water, so we did not look for it. We also tried to see the top of Templo Sumergido but without any luck. Lonely Planet claims the top of the tower should be visible, but maybe there is more water in the lake this year. 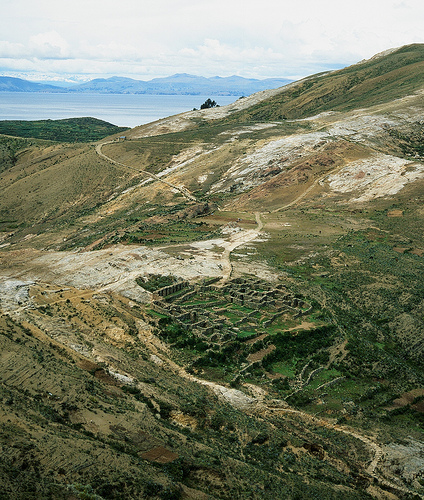 The next day we moved to the south village. By boat again, hiking seemed too exhausting. We walked round a bit, but there is not as much to be seen at this side (except maybe for the ruins with funny name Pilcocauina). 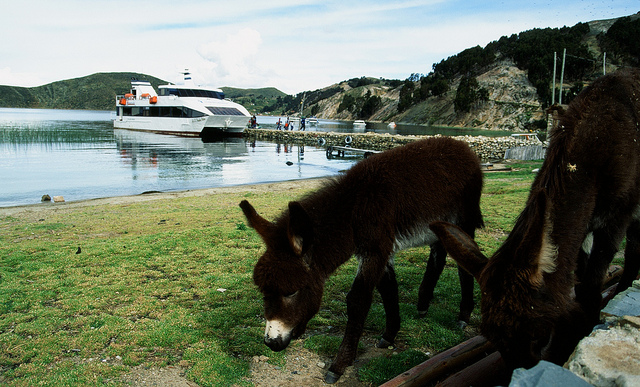 Both days we had a good view on the Isla de la Luna, where the moon was born. In the north village they said there is no boat connecting from the north to Luna except private boats for 500 BOL. In the south I hoped there would be a regular cheap service. We asked in the port, in the village, in our hostel and everywhere the answer was that there as no boat except for private boat for 300 BOL. “I can take you there my friend”. No luck. 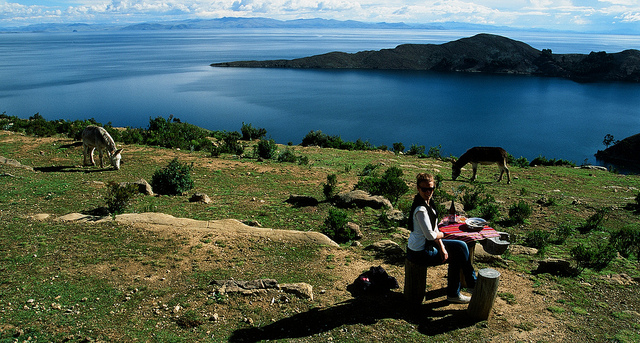 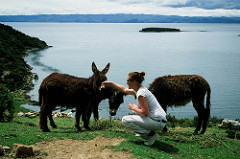 As there was not much to do in the south, we spent the afternoon having a long lunch in Las Velas . Excellent trout. The owner – Pablo – even suggested that we can come for dinner. He would prepare a fire outside. I was very sceptical about this promise, knowing how most Bolivians lie all the time. Anyway we came there for dinner. There was no fire lit, so we went inside. Once Pablo recognized us by the candle light (there is no electricity here), he went out and lit the fireplace that had been prepared for us. Wow, I really did not expect that. Later we had excellent hot wine with some local spirit in it and excellent pizza. Argentinian/Australian couple joined the fireplace and we had really good time as Pablo was teaching us some Aymara words and explaining Aymara astrology. Aymaras do not call Orion Orion, but Poncho, because here it is in a different position and the three stars that are our Orion’s belt are their Poncho’s buttons. Later he told us that there is a boat to Isla de la Luna at 10am or 10:30 the latest. So Pablo is the only man on the whole island who not only keeps promises, but also does not lie like all the rest.

The next day we went to the port at 9:45. The ticket seller came and asked where do I want to buy a ticket to.

There is no boat to Isla de la Luna, I can take you my friend for 300 BOL.

That’s nice of you, but I will wait for the boat at 10am.

Ohhhhh. In that case, do you want to buy a ticket for that boat.

Haven´t you just said there was no boat to Isla de la Luna? 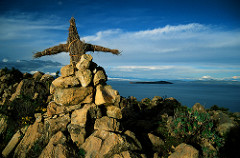 All are liars (except for Pablo). So much so that I could not believe it. The boat came and we had our trip to Isla de la Luna for 20BOL. Coming back I agreed with the boat owner to pay him directly for going to Copacabana. All the locals were mad at us and they even came running to the boat asking the boat owner how is it possible that we are on board without buying a ticked from them, the liars. But we had a plan for that and reused the ticket from the way to Isla de la Luna. Later the boat owner told me that the whole village is always lying about his boat existence and he cannot do anything about it, so why not rob them off the ticket commission.

And that was the trip to the islands of liars and two honest men.