After Chimborazo I went directly to Baños. I could not wait to get to the hot springs for some rapid regeneration. The springs open at 6pm, so everybody is advised to arrive just at that time so that the water is still clean and the place not overcrowded. This means it does not work, because it gets overcrowded at 6pm exactly.

One pool is 44.5 C and the other one is 17 C. You start with the hot one. At this temperature it gives a real boiling sensation. Probably close to what lobsters are experiencing. I saw one gringo jump in. He kind of jumped out as fast as he could while almost screaming.

Then the cold one. Then your nerves just give up and you can keep changing the pools for an hour or so. Somehow this shock to the nerves provokes endorphin creation. The whole place felt like a hippies gathering. Minus the drugs and sex (to my knowledge). But everybody is high, smiling all the time, talking to absolute strangers. This is true for locals as well as gringos. Truly unusual experience.

The best part is it makes you tiredless for a long time. Party hard, get up next morning full of energy and looking forward to go to the spa in the evening again. Repeat… 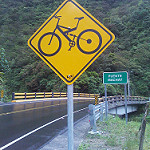 During the day I went cycling with Sam and Nick. Most of the way was downhill. We stopped for several waterfalls. The locals claim there are more than 300 waterfalls in this area. The once we saw very impressive. First a private double waterfall that had to be reached by a cable car. 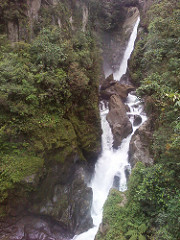 The second waterfall was even more amazing. Before getting to it there was a sign:

It did not change my world views, but there definitely is a truth in it. The best part was climbing behind the waterfall and taking a shower in it. Hope Sam and Nick would share the pics from this soon. Sam’s take on Baños here.

Next stop – Quito. Party place, really. But not only. The historical center is super beautiful. I was shown around, went to Virgen del Panesillo, even hitchhiked downtown.

We also went up the mountain with a cable car. When you get up, there is a sign saying you are in 4100m and if you have heart problems you should not be there. Well at that point it might be too late. 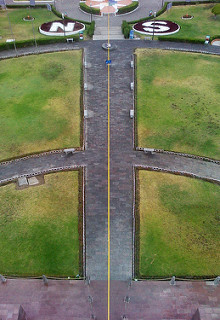 One day I went out of Quito to see the equator. There are two places. One where the French proudly measured to be the real equator a few centuries ago. Then a huge monument has been build there with a golden line just on the equator.

Then in the age of GPS, it was found out, that the real equator is about 300m to the north. Never mind, they built another museum there. This one is actually much more entertaining. They have a sink, fill it with water and show you that the water just goes out with no turning if the sink is exactly on the equator. Then the same experiment 2 meters to the southern hemisphere and the water turns clockwise. Yet another experiment 2 meters in the northern hemisphere and it goes counter-clockwise. I was very sceptical about the 2 meters making any difference, but I could not see any trick in the experiment itself. So now I´m in doubts.

The next experiment was balancing an egg on a nail. This is supposed to be much easier on the equator as no forces are pushing the egg to fall. And it really is. Now I am officially certified to do that. So if you need an expert, just ask me. 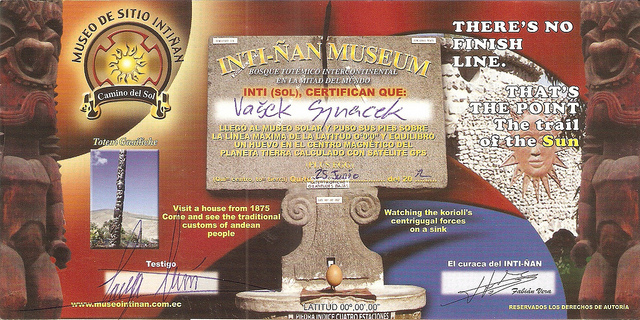 A few days later I was kicked out of the hostel. Apparently I did not tell them how long I´m going to stay (I never do that) and there was no problem with that until one day when they booked out before I woke up. So I decided to leave not only the hostel, but also Quito and also Ecuador.

It has been a nice month in Ecuador. Most of the time drinking Cerveza Pilsener. It is not as good as the real Pilsner from real Pilsen, but good enough. It has the best ever tagline – Ecuatorianamente Refrescante.