Crossing from Argentina to Bolivia took hours. Only because of really bad organization which surprisingly was on the Argentinian side, not on the Bolivian as one might expect. There were no problems with my torn passport so Nicaragua is officially the only country which ever had a problem with my passport damaged by ignorant US immigration. At this border however I did not yet know it was the last border I had to cross with it.

Immediately after the border you notice the difference. Everything is more dirty, disorganized, less like Europe. I felt like I´m back to true Latin America.

We on purposed came on one of the days, when there is a train. At the train station we learned that only Executive and Popular class tickets are left, no middle class. Having been warned from the Popular, we bought the Executive and waited.

Executive class has chairs and windows. That was a good sign. No, the windows were not functional all (some could not be opened and some could not be closed) and our chairs could not be lowered either. But there was a flat screen showing Bolivian railroad ads in English. Now this really is Executive, isn’t it?

Some time later the train started to move. Now all the difference between classes has been eliminated. The whole thing was moving so slow, that the buses on parallel road were overtaking us. Worse, the train was shaking and bumping so much so, that reading or sleeping was impossible. Now that is Executive, but as in “execute them all!”

I almost forgot, there was a dining car. In was too hot inside and even the overpriced beer did not provide sufficient remedy.

Three hours later, we were happy to reach our destination Tupiza. And I did pity those continuing for another few hours to Uyuni. We decided right away, that our original plan to catch the train in few days to go to Uyuni needs some changes. 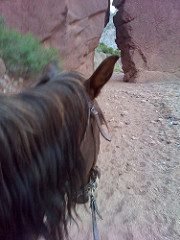 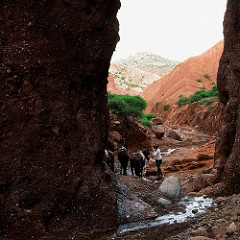 In Tupiza we read the Altitude Sickness description in Lonely Planet and Wikipedia. Realizing we are now above the line of danger (2600m a.s.l.) we started to observe the symptoms on both of us. On Misa more. So we decided to stay a few days to acclimatize. I got bitten by a swarm of local wasps to make things better.

The last day of our acclimatization we went on 5 hour horseback riding tour. Through the stunning countryside with features such as Puerta del Diablo and other puertas. I could not sit on my ass for some time afterwards.