Not everything goes as one wishes, that is normal. But when you have a few days of failures you start wondering why. 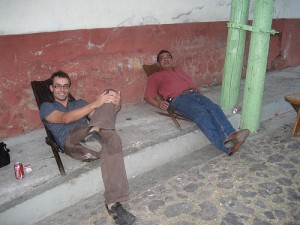 So we arrived in Suchitoto. Very nice place in the north of El Salvador. The local tourist attraction is beautiful waterfall over strange black hexagonal stones. Quite similar to the one in El Nancito actually. The locals told us it was not safe to walk there, instead we were advised to get a police escort. At first it seemed like a strange idea, but this is the way it is in El Salvador, they want tourism so much, that police will escort you to many places free of charge just to make sure you get a good experience with no violence mixed in. So we went to police station in the morning and asked for a tour to the waterfalls in the afternoon. When we arrived at the police station in the afternoon, they had no cars disponible. Failure 1. We stayed in the police office for more than an hour discussing bittorrent, megaupload and such things which if any police officer could speak English I would not discuss in his presence. 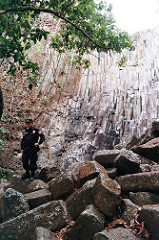 Then finally they got a car. From their colleges who just came in in full armor and with machine guns. We were escorted to the waterfalls. Walking towards the spot I told the policeman: “I heard there was not much water this time of year”. He replied: “That’s not really true. There is NO water at this time.” So there we were, watching waterfalls without water. Failure 2.

We decided to leave the next morning to Chelatenango department via the ferry. The hostel owner’s brother promised to give as a ride at 11am. By the morning he has forgotten such promise. Failure 3. We took the bus to the ferry and as we were getting there we saw the ferry just leaving. Failure 4. 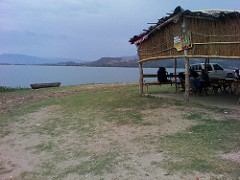 We sat at the “terminal” for about three hours. At that point the locals said it might not come anymore because when there are not to many people the ferry owner simply goes home to enjoy the afternoon with his family. So we went back to the hostel we left that day. Big Failure.

Because we got some free food from the owners we wanted to cook them something for dinner. The hostel owner’s brother promised to bring a working oven for the evening. So we bought chicken and veggies and prepared everything only to find out the oven was not coming. Not that the guy would forget his promise again, this time he simply pretended he said that we could clean their ugly dirty oven if we want to use it. That would not happen and they can do whatever they want with the bloody bird. Failure 6.

The next day we woke up early in order to have better chances at catching transportation. While eating breakfast we realized nobody brought the room keys to the kitchen – so we were locked out and had to wait for the owners to get second key. Failure 7.

Finally we caught buses and arrived to La Palma, where we wanted to climb the highest Salvadorian mountain. But we were told that 1pm is already too late to do that. Failure 8.

The next morning we woke up early again to make the highest mountain finally. We went to San Ignacio from where there should have been a bus at 9am. We arrived at 8:45 so I thought finally the timing is right. Except for the fact, that the bus did not arrive. No mountain again. Failure 9. 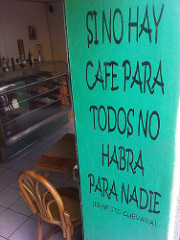 We went back to La Palma. There was supposed to be a festival in the afternoon. But the place was dead all the time until the late evening when we went to sleep. I was woken up at 4:45am by fireworks. So there had been a festival, just that we have slept right through it all. Big Failure 10.

On the plus side, they have excellent coffee in La Palma. Finally a perfect espresso at Café D’ Café. And their big sign explained a lot of what was happening with my travels lately: 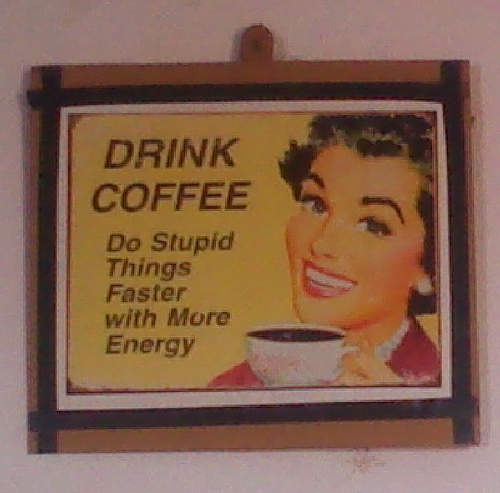