The stop in El Nancito was a bit out of random. I read the two paragraphs about the place that are in Lonely Planet and decided to do it. Rock carvings that 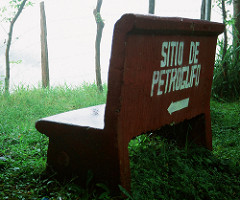 And since few people outside of Panama know about existence of Chiriquí, this place just has to be really unique and out of the gringo trail. Although I doubt it as anything that gets to Lonely Planet does get known quickly. 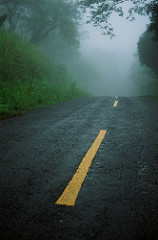 So first I almost froze in the bus from Santiago (as in all buses in Panama). I asked the ticket boy to stop the long distance express bus in El Nancito (read: in the middle of nowhere) and I explicitly said I had no idea where that is, so he has to remember to stop there. It worked perfectly. I got of the bus in 2 jackets still shaking from the cold, but outside it was about 30°C and raining. I changed to swimming suite and started hiking the 3km up. After about 2km I saw a Mirador – a newly constructed shelter with beautiful view, if only I was not in clouds with about zero visibility. 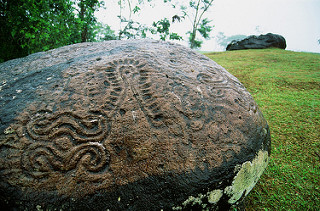 One more kilometer and I was in the town. I imagined the carvings to be behind the town on some kind of big rock. Wrong. They actually made a museum inside the town and the rocks are series of relatively small volcanic boulders in the museum garden. They are nice and interesting though.

By the time I have seen all rocks it started raining really hard. Just to kill time hoping the rain would stop, I read all the material inside the museum. I also examined the book of visitors: all Panamanians, one Mexican about a month ago and one US gringo about 6 months ago. So maybe 2 paragraphs in Lonely Planet are not enough to make place famous after all. 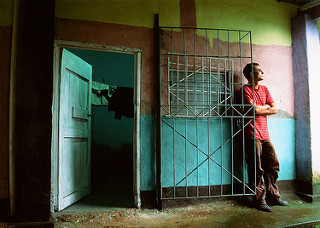 I had to wait for the museum to close at 5pm. Then Cesar took me to the accommodation. I have never ever stayed in place like this. It was basically a room at the back court of a house owned by a local old man. He kicked the chicken from the door, opened the door and there it was – two beads and nothing more. I could use his bathroom inside the house, just there was a small problem, that there was no water and that he locked the house when he went to sleep – but I managed to pee in his garden, no problem. 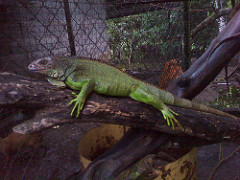 I also asked Cesar where can I eat. He told me to come over to his place at 7, so I did. He was not there and his wife told me he was at the neighbor’s and that it I can join them there and I could see the animals. Nice.

So I went to see the neighbor’s property. Quite a cultural experience of its own. And I saw the animals and also how to cut holes in lamb’s head so that the horns can grow better.

Then we went to another house where older women was cooking dinner for about a dozen guys. I got a plate too. Perfect. Rice and Pasta. In the whole town there was nobody who would speak any English. One guy said “Goodbye” after the dinner and everybody was laughing at him, that he is the local English translator, although that was likely the only word he knew. After the dinner I got invited to Cesar’s house for a cup of something. Something I could not understand what it was. It was a desert, served hot in a cup like pudding, but with a taste somewhere between rice and corn flakes.

In the morning finally it stopped raining. A again asked Cesar for the directions to waterfalls. The waterfalls are so unknown, that they are not even in Lonely Planet. Cesar very correctly assessed that if he would not come with me there would not be any chance I could find the waterfalls myself. So we set up for a half an hour hike in the cow meadows just to find the most hidden and beautiful waterfalls ever.

On the return to the town I stopped for breakfast at the old lady’s house. I got fried flour tortillas and liver (no idea what kind of animal’s liver it was). Delicious, although I would normally not consider liver for breakfast. I have learned from Cesar, that the lady is not cooking out of altruism, but that she sort of represents the town’s restaurant. So after the breakfast I asked for la cuenta. 15minutes counting of how much I ate at the dinner and breakfast I was presented with the final price. $2.45 altogether. Best value ever. Yes I tipped (and yes, more than 5 cents).

Then it was time to pay for the accommodation. $4. The cheapest I have ever paid in Panama, although here the price was just right. I also asked how many tourists the man is having in the room. The answer was that there was a mad Russian about half a year ago, who bought horse in Panama City and was passing by. He considered to stay, but did not stay in the end. So I might have been the first tourist staying this year. He gets some seasonal workers to stay sometimes though.

Cesar and his friend were leaving to Santa Felix so I joined them for the 3km hike down and bus back on Interamericana. 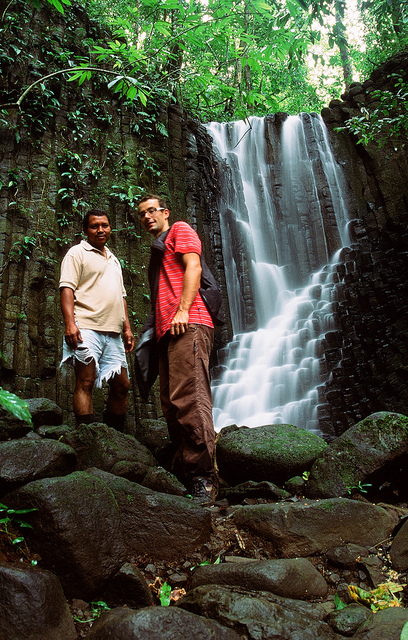