Before coming here I have been to only one volcano – Vesuvius.

Panama has only one volcano – Barú. It is also the highest mountain of Panama with its 3,474m above sea level. This one has been on my todo list for quite a while.

When I arrived to Boquete, I wanted to climb it as soon as possible. There are basically two possible ways of doing it:

The first evening I was the only one who wanted to climb by night. But I was not crazy enough to do it alone. The second, third and forth evenings in Boquete, I wanted to climb by night and there were always others willing to do it too, but it was raining a lot. Then I had a week of Spanish classes so I did not want to skip lessons. However by Murphy’s law, the weather was nice half of the week and some guys did it and saw both oceans.

The next weekend was the last chance to do it. I manged to get a deal no tent rental and agreed with Patrik to climb the volcano by the second method. We set off late and neither of us in a particularly good shape. We got a taxi to take us to the trail start. As we were going in the taxi I warned the driver, that he was meant to turn left to get to the Volcan. No se preocupe. 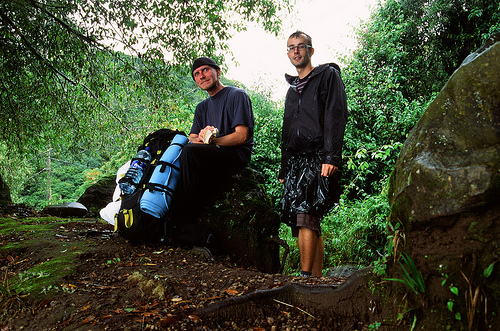 Half an hour later we were getting of the taxi at the supposed trail start. Other local guys were getting in the taxi and as we had a little chat, it turned out, that we were at the wrong place. So we got back to the taxi and the driver was trying to take a short cut to recover from his previous mistake. No se preocupe. It was a shortcut to destroy his car more than to get us where we wanted. 10 minutes later it was obvious that the car cannot get any further. We got off and the poor local guys had to push the taxi car back the way we came. It had started to rain.

We hiked for about half an hour in rain to only get to the start of the trail, where everybody else who got a reasonable taxi was starting to hike up. It was already after 3pm.

By 7pm we had managed to climb to about 3000m above sea level which was about 10km from the trail start or about 13km from where the taxi left us. It was getting dark and it has been raining all the time. We decided to camp there, the place was reasonably good for camping. I set up an alarm clock for 4am, so that we can finish the remaining 4km climb early and still get the sunrise and both seas view. 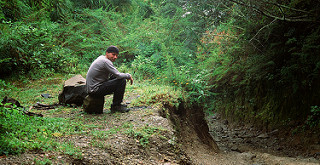 By the time we reached the trail start, we were both tired and soaking wet. There was no taxi, no bus, no car anywhere in sight. According to road signs it was another 11km on the road back to Boquete. 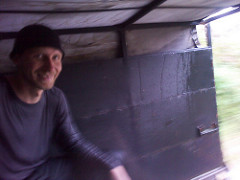 After another half an hour, we hitched a van, possibly a covered sheep van. Got in and got a ride almost to the hostel. This was probably the most comfortable part of the whole trip. I left Boquete the next day and left this volcano unconquered.

Now, just two weeks later, I was invited by Evan to his place on the side of Volcano Barva, near San Jose, Costa Rica. The plan was to get up at 6:30 on Sunday morning and climb it before the weather gets worse in the afternoon. At 6:30 it was raining hard. We both individually decided to kill the alarm clock and sleep. 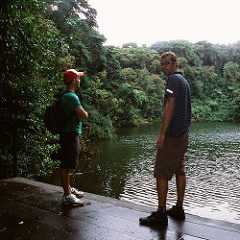 At 10:00am the weather got better, so we headed up. In taxi as far as possible, than on foot. This time we made it to the top at almost 3000m above see. There were no views on San Jose or anything else on the way up, but the forest and crater lake are nice on their own. On the way down, the clouds cleared a bit and we could even see half of San Jose. Nice 20km hike + 6km hitchhike altogether.

Costa Rica has many volcanoes, some of them active, so maybe this is not the end of volcano story. More to come…

PS: unfortunately most of my photos from both treks are still on the unprocessed film. What is worse is that they apparently stooped processing slide film in the whole Central America, so I will have to wait a long time to see the pictures. 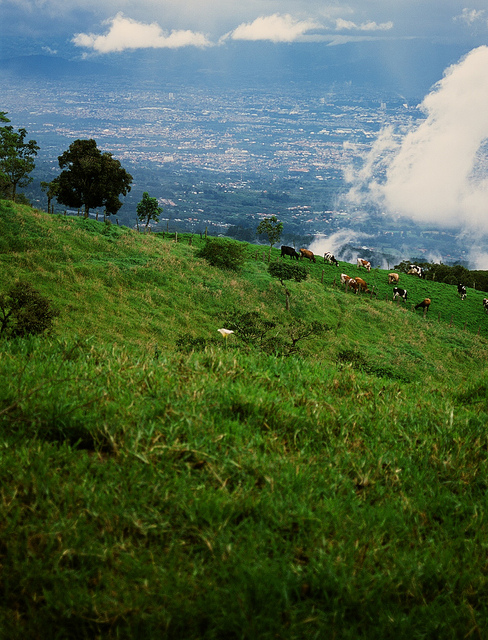