After I finally fled Bolivia, my first stop in Peru was Puno. A place with such a boring name can not be interesting, right? I only stopped here to go to the floating islands. Some say it has become such a tourist business that it is not even worth going. Well the first part is true, but it is still worth of going. About an hour boat ride from the port and you arrive there. 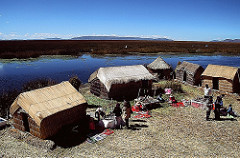 There are almost 200 floating islands these days. More than ever before, because apparently the tourist business is so profitable that families are having more children and nobody wants to move away. They have a method for building more islands – whenever disputes happen or children want their own islands, they basically cut the existing island in half and move away.

These days they have floating school, floating restaurants, even floating graveyard. But all they do the whole day is creating souvenirs or walking tourists around and explaining the way their grandfathers have lived not to long ago. I got to paddle on kind of dragon boat while the local girls were singing in all possible world languages. Then I had to sing in Czech, because this one language they still did not know. I wonder if they will add “Skakal pes” to their repertoire from now on.

Another experience of Puno was one night out when we collectively ordered a swimming pool of Lake Titicaca. A swimming pool means a really big cup for a few people. Lake Titicaca is a drink made of Pisco, something blue and something even worse. Anyway, never ever order this. It is as pleasant as a swim in Titicaca itself. 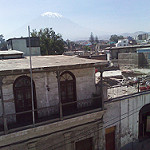 The next day I left to Arequipa. Later I learned this is not the optimal way, that you are supposed to go to Cuzco first, then Arequipa and then Lima and this way avoid the Cuzco-Lima mountain road. Too late. 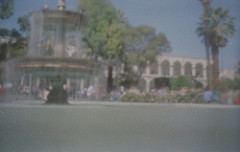 Arequipa is a charming city with even more charming nightlife. For the first few days I only knew the city by night and by early sunrise hours when one can see the surrounding volcanos without the late afternoon smog cover. I even slept through 5.1 earthquake.

Then I went to Cañon de Colca. Another gringo trail highlight. First day was spent on the bus ride, frequent stop at viewpoints at 5000m and evening hot bath (hot bath with cold beer in hand). Perfect.

The second day we went to see the actual condors. We were there at 9am. By 10am all benches and walls were covered with sitting people waiting for condors.

Come on, condors, we are ready! 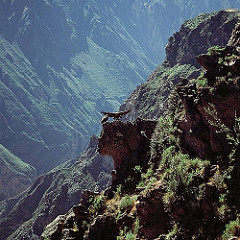 And as I said it, the first one came. They are huge. Even the child condors are huge. And they fly really close to people. I don´t understand their behaviour. Maybe they show up every day hoping that one of the hundred watching humans would suddenly die and they could have a decent breakfast.

Anyway, I almost died coming back to Arequipa. Then I laid in bed for a day. Then I thought I´m ready for a small one beer party. I was not. I laid in bed for another two days. Only then I was confident enough not to shit the overnight bus to Cuzco.