Where Río Iguazú meets Río Paraná, Paraguay meets Brazil and Argentina. Three different worlds. Ciudad Del Este is typical Paraguayan disorganized city. Foz do Iguaçu, just over the bridge, is a clean city with residential skyscrapers. Also the language is different, so people working in tourism try to speak Spanish to foreigners and while doing so they take pride in their language abilities and assume they are doing you a big favour (English is as scarce as anywhere else in Latin America).

Almost all tourists come here to see the falls. There is a city public transport to the falls, which is super convenient. The park entrance feels like big tourism factory, which it is with some hundred thousand visitors per month. However once inside, the crowds are not that annoying.

The tour starts with bus ride to “Primera Vista”, the place where you can see the falls for the first time. That was already impressive. Later you learn, that it is just a small part of the whole thing. The 3km walk shows you more and more waterfalls, it really is incredible. 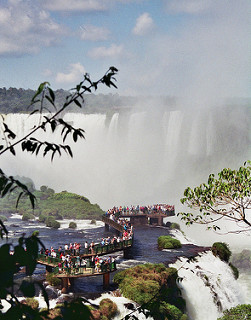 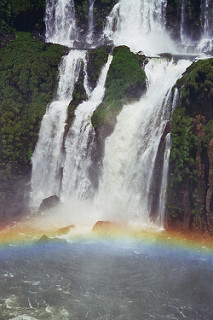 The highlight at the end of Brazilian side walk is a view on Gargantua del Diablo from a pier over waterfalls close by to the gargantua. It´s on a sort of step in the falls so there is water falling from above and also falling down under the pier. Everybody gets wet, including the cameras. The only exception is Japanese tourists – they have plastic ponchos and camera covers. 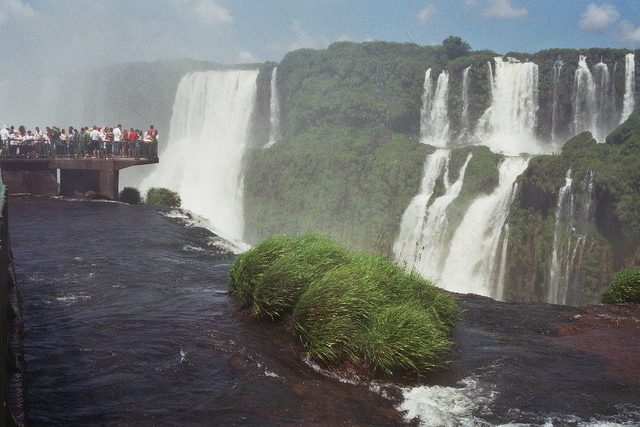 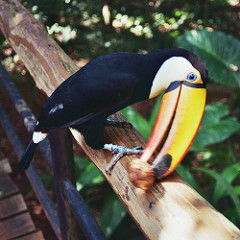 There is a bird zoo next to the waterfalls, so to round up a tourist day we went there. In many cages, you walk inside with the birds. Generally that is a pleasant experience (like in the humming bird cage), but the last cage with a lot of hungry huge parrots might get a bit scary.

Over another bridge is Puerto Iguazú, Argentina. It feels much less polished than Brazil, this you can feel already at the border, but somehow I felt more comfortable at this side.

The Argentinian side of falls is also reachable by public transport, the entrance again feels like tourist factory, but the difference is inside the park, where you can walk or take a train instead of a bus. Also Argentina contrary to Brazil does not allow Helicopter flights over the falls, so the park is a bit quieter (but you can still hear the Brazilian helis).

Walking between the falls is equally nice as on the other side, you just get different views. To top up the experience we went on a boat trip, which in the end goes inside one of the waterfalls. Totally wet experience.

The highlight of this side is a pier directly over the Gargantua del Diablo. This is so impressive, that for this I would give to the Argentinian side one point more. (But this is on the other film, so no pictures for now.)