I could not wait to start the adventure with my brother in South America. To get from London to Asuncion, Paraguay, took me 27 hours. Vasek arrived the same day early morning, got us a hostel during the day and picked me up the airport in the evening. He did one more thing – he bought a cup of cappuccino at the airport. It turned up a big mistake.

The next morning he found himself unable to move far from the bathroom. We even had to change the hostel, because in the original one we were staying in a dorm and he could not make it from the top of a bunk to the toilet in time.

So I started exploring the city (and its surroundings – it took Vasek a while to recover) by myself..with no knowledge of the culture and more importantly the language. Trying to use English would have been just pathetic.

There were quite a few differences how the place worked to what I was used to. Police was pretty much on each corner. I talked to them – well, they talked to me – when they stepped into my way and did not allow me to certain areas of the city, where I would have been mugged for sure. On the other hand I was sure that if somebody did try to rob me, finding a help would not have taken long and the police would have been sure who is the tourist and who the thief .. by that time I was sooooo gray-ish white (yeah, thank you London), that without opening my mouth locals were asking me immediately “¿De donde eres?”.

I liked traveling by bus .. you can get on and off a bus wherever you wish as long as you give the right signal. This is how I was going to a botanic garden and had to go back at least a kilometer, because I did not see the button and nobody else was getting off.

In the botanic garden there was a ZOO as well. I saw a puma .. one check on my South American to-do list .. but more scary were the huge ants that were walking on railings. Also I believe I saw a crocodile or something like that, which was inconveniently big under water and not in a cage. Hmm, I was not brave enough to go and check. I just saw the kids on the other side of the pond how quickly they ran off.

A different day Vasek made a call to Makka, an Indian village off Asuncion. When Jose heart that I do not speak Spanish and not know how to get around he offered to pick me up at the hotel and take me to the tour himself. I was hoping Jose was like Winnetou and Makka full of wigwams, but I was SO wrong. Today, Indian villages look like slums full of corrugated-metal-sheet houses on dirt and rubbish. Indians wear Adidas and put on traditional costumes only if you pay .. pay a lot. 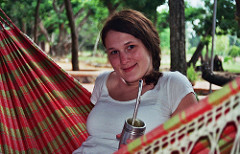 Apart from Ausincion we visited one estancia (imagine a farm) in the middle of nowhere .. though close to a well described village in a guide book. We went for a walk and were looking really carefully for why this place was supposed to be so amazing but for a long time it seemed there was nothing. No animals at the estancia, no horseback riding tours, no breathtaking handicrafts. Then dinner was served .. so much delicious meat at once I hadn’t seen since I moved to London. And terere (cold mate). And hammock. And it turned to be such a relaxing place that we were happy to find it. Even though it wasn’t meant to be the last “end of the world” we visited on our journey.

Simply, until we got to Argentina, I had a several culture shocks, including the one when I refused to go even close to a doctor’s door, where Vasek was searching help. Supposedly the other half of Paraguay we haven’t visited speaks German and is better organised then Europe, but we didn’t take the risks and traveled rather outside the Paraguayan borders.