I skipped Honduras intentionally. I’m probably wrong, but I don’t see anything interesting in that country for me (I don’t dive), and it is the country with the world’s highest intentional homicide rate at this time. So we only went through with a few buses, only stopping to change or show passport.

El Salvador is a different story. It is only second in intentional homicide rate, but more importantly has nice places to visit and is inhabited by super friendly people (those not pushing the rate up, obviously). The first friendly people, we met on the first bus from Nicaragua-Honduras border. They showed us where to change buses, where to show passports, where to have dinner, where to go to hotel (too expensive) and in the end, they invited us to stay at their place in San Miguel. 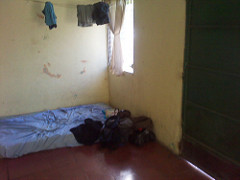 Now how friendly is that! I got a mattress at the front room, right next to the entrance door. The toilet was almost in the living room, did not flush and at first did not have light, the bathroom was outside, the cigarette ash was thrown on the floor inside, so were the butts. But we had fun playing cards till midnight – poker which was not poker (no money involved, different rules) and one other game which was completely out of my mental capacity, but it seemed it had fixed and sophisticated rules). We were not allowed to leave the house, as after sunset the streets are too dangerous. The breakfast was delicious and bus terminal was just $2 taxi away. 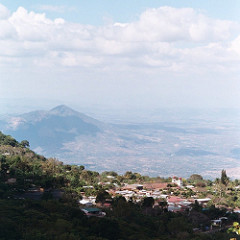 Alegría was totaly different. This town is incredibly high (but not as high as Sněžka) and offers spectacular views of half of El Salvador from almost any restaurant or street. The best view is from local tourist attraction – the hundred steps, which is what it literally says. Some Salvadorian tourists were even racing up the steps. And that is another thing about El Salvador, the majority of tourists are Salvadorians, I have seen only a few gringos, most of them being missionaries (people ruining local culture and exploiting the already poor), not tourists.

In the afternoon and then even more at night there was a strange political happening. Apparently hysteric and brainwashed youths were driven around in large cattle trucks, wearing red t-shirts, waving red flags and dancing to Soviet Union Anthem with Spanish words. I was explained, that it is celebration of future (11th March) election victory of FMLN – the political party of current president which openly considers itself communistic and as usual in this part of world also has a legacy of armed participation in last civil war. What a lovely way to destroy evening charm of the town. 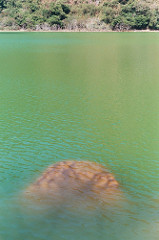 The next day we climbed up the volcano to see Laguna de Alegría. Nice volcanic laguna filled with sulphuric water of all shades of green (can’t wait for the photos). Nobody was swimming so I did not want to take chances either. The local legend is, that there lives a sulphuric nymphomaniac mermaid that likes to bring nice males to the bottom to play with. Their dead bodies are left to surface 3 days later. ¿Y si le gustan chicos europeos? 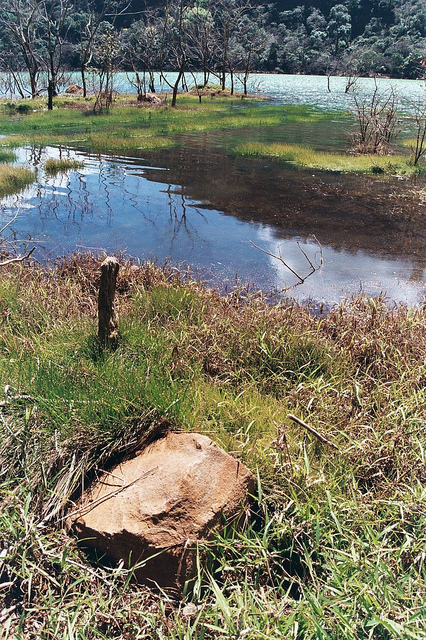