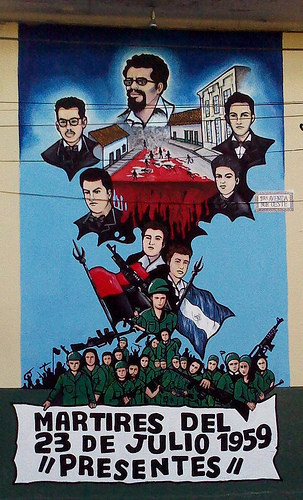 I have never thought Czech history being particularly nice and peaceful. However since 1620 there were basically no big wars or fights in the territory of Czech Republic. Sure The World War II was bad. So was 40 years of communism. But somehow after having heard the bloody history of Nicaragua a couple of times in the last few days, I am beginning to think that everything is relative.

When locals are asked if they think of Nicaraguan history as of revolutions coming every 20 years, the say “No, that is not correct. It is actually every 10 or 15 years”. That might be a bit of exaggeration. On the other hand, all the time until now there has never been a nica generation that could live the whole life peacefully in this country.

Here in Leon it is especially visible. My Spanish school afternoon activity yesterday was to walk around the town to see street paintings. I thought good, graffiti, independent street art. Quite the contrary was true. The murals are state sponsored and well preserved propaganda.

Then we got to the cross-road where the massacres of 1959 happened. This is a very lively legend, especially here. It is something like if you multiply our “Day of Blood” by Jan Palach. They were students in peaceful demonstration shot by the military. There are four white crosses on the ground where the corpses have been found. Within a few hundred meters from there, there are several murals depicting the scene. Try to find 10 differences between the mural above and the real place photograph (taken more than 40 years later) bellow.

History is the past, you would think. But it is not quite so easy here. The current leading party FSLN and the current president Daniel Ortega are direct successors of this revolution. That is why the murals are so well preserved (in fact I have seen two painters restoring the painting this morning as I was walking to school). The whole country is basically painted in red and black colors, the official colors of FSLN (you can see the flag in the painting at the top, next to Nicaraguan blue and white flag).

Yesterday, as I was being told all this history while observing the murals, just a few kilometers away in Managua, Ortega was swearing presidential oath for for his third term. Third term is not allowed by Nicaraguan constitution, but somehow that does not seem to be an issue any more.

There were many guests at the ceremony among the most notable ones were Venezuelan Hugo Chaves and Iranian Mahmoud Ahmadinejad. What a company. Only the Castro brothers were absent.

I’m obviously not in a position to criticize all this, as I’m a European Union citizen, citizen of the union that contains both Spain, the country responsible for a lot of blood here, and Hungary, which seems to have lost free speech guarantees in constitution just recently.

I was quite delighted that today’s activity was a visit to Museum of Rubén Darío, Nicaragua’s most famous poet. And tomorrow we’ll go to the beach. And I might skip Friday’s visit to the local colonial fortress turned into prison and torture place during last century.