I flew to Panama with Iberia, the Spanish airline. I seriously think these guys should consider applying for Michelin stars. The food for being served on board was really good, 3 times over 10 hours of flight. 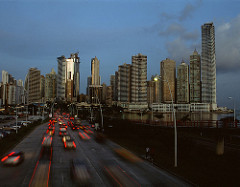 I arrived in PTY airport at about 5pm local time. Passport check queue was so long, that we all waited for 1 hour to get to the officer. My officer did not speak any English and it was probably the first time she saw Czech passport. What I managed to understand after 10 minutes of conversation in Español was that I should seriously learn more Español para conocer el país. What she was saying was very much in line with how the conversation felt. Finally she let me in just to do what she was saying.

There was an Iberia complains desk (probably very much used) where one furious Spanish lady was already complaining to anybody passing by about one of her suitcases not arriving. Unfortunately the one with all the medicine she was taking (probably to control her temper). I tried to calm her down by saying that one out of five suitcases getting lost is quite a good ratio. Didn’t help. I tried to calm her down by listing what did I have in Panama at the moment: clothes I was wearing, passport, credit card, some US$, Lonely Planet, small camera, phone and phone charger which does not fit Panamanian socket. Didn’t help. Man from Iberia arrived to the desk so she started complaining to him. Did help.

The Iberia guy did not really enjoy speaking to the lady, so he instead decided to fill in the papers with me first. Didn’t help, she was very unhappy about that, as if filling the papers would bring her the suitcase faster. Anyway, I got this paper saying that my small back pack with all the stuff was missing, it’s location is unknown and once they would know where in the world it is, they will call the hostel in Panama which I was not sure exists and where is it exactly located. Perfect.

So how do I get to the hostel from Airport? Lonely Planet says to get a taxi if it is dark, which it was at 8pm (after 1 hour of queue and 1 hour of waiting for backpack and 1 hour of listening to the lady’s problem). As they explained me at the information desk, the taxi does not have meter and the price downtown should be fixed. $30 for single person or $11 for “Collectivo”. So I went outside and asked a taxi organizer for collectivo. He said “no problem” just wait for the other 3 to show up. There were no other 3 at this time arriving to Panama. There was only one Colombian guy who insisted on his own taxi in order not to get robbed. The driver of the taxi told me to come to sit in front, he would take the Colombian to his hotel and than me to the hostel. Columbian for full price, collectivo price for me. As I was sitting in front, I was considered taxi crew and the Colombian could not object to that. That’s the way you do business.

So there I was going to the city with an scared Colombian, sitting in a front seat of the taxi and almost without any material stuff to bother about. Quite nice free feeling actually.

The hostel is hard to find. The taxi driver had to call the hostel 2 times to get directions. But we managed to get there. It is really in the middle of sky-scraper down town, but it is also a very small house. When you go to the garden with swimming pool behind the hostel it is quite funny to see all the sky scrapers next door. The pool looked nice, except I did not have swimming shorts. That bit I did not like, here I am in hot Panama city night, on the side of pool but without swimming shorts. Well, only beer can fix that. 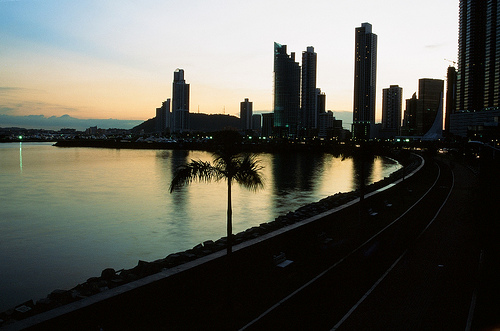 I went to buy some beer. After four beers with the other hostel guys my back pack arrived. Perfect. I went to get the swimming suit, ran to the pool, jumped in and heard this ugly ugly noise. It was only a few seconds later I realized that was my head hitting the floor of the pool.

Now, 5 days later, my head is almost not hurting when touched and almost all of the bloody scarf is hard to find in front of mirror. But I should have probably gone to the doctor and get yet another medical report for my collection of reports which start with “Around midnight, after a few beers” and ends in “hit his head, all life functions normal”.